The psychiatric survivors movement (more broadly consumer/survivor/ex-patient movement is a diverse association of individuals who either currently access mental health services (known as consumers or service users), or who consider themselves survivors of interventions by psychiatry, or who identify themselves as ex-patients of mental health services.
The psychiatric survivors movement arose out of the civil rights ferment of the late 1960s and early 1970s and the personal histories of psychiatric abuse experienced by some ex-patients. The key text in the intellectual development of the survivor movement, at least in the USA, was Judi Chamberlin's 1978 text, On Our Own: Patient Controlled Alternatives to the Mental Health System. Chamberlin was an ex-patient and co-founder of the Mental Patients' Liberation Front.[5] Coalescing around the ex-patient newsletter Dendron, in late 1988 leaders from several of the main national and grassroots psychiatric survivor groups felt that an independent, human rights coalition focused on problems in the mental health system was needed. That year the Support Coalition International (SCI) was formed. SCI's first public action was to stage a counter-conference and protest in New York City, in May, 1990, at the same time as (and directly outside of) the American Psychiatric Association's annual meeting. In 2005 the SCI changed its name to Mind Freedom International with David W. Oaks as its director.
Common themes are "talking back to the power of psychiatry", rights protection and advocacy, and self-determination. While activists in the movement may share a collective identity to some extent, views range along a continuum from conservative to radical in relation to psychiatric treatment and levels of resistance or patienthood. 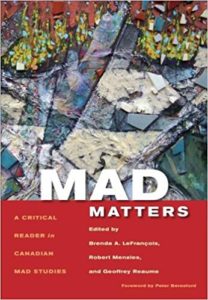 Mad Matters: A Critical Reader in Canadian Mad Studies, Edited by Brenda A. LeFrançois, Robert Menzies, Geoffrey Reaume, ISBN: 9781551305349, Canadian Scholars’ Press, 2013
In 1981, Toronto activist Mel Starkman wrote: "An important new movement is sweeping through the western world.... The 'mad,' the oppressed, the ex-inmates of society's asylums are coming together and speaking for themselves."
Mad Matters is the first Canadian book to bring together the writings of this vital movement, which has grown explosively in the years since. With contributions from scholars in numerous disciplines, as well as activists and psychiatric survivors, it presents diverse critical voices that convey the lived experiences of the psychiatrized and challenges dominant understandings of "mental illness." The connections between mad activism and other liberation struggles are stressed throughout, making the book a major contribution to the literature on human rights and anti-oppression.

Talking Back to Psychiatry: The Psychiatric Consumer/Survivor/Ex-Patient Movement (Google eBook), Linda J. Morrison, Routledge, 2013
Linda Morrison brings the voices and issues of a little-known, complex social movement to the attention of sociologists, mental health professionals, and the general public. The members of this social movement work to gain voice for their own experience, to raise consciousness of injustice and inequality, to expose the darker side of psychiatry, and to promote alternatives for people in emotional distress. Talking Back to Psychiatry explores the movement's history, its complex membership, its strategies and goals, and the varied response it has received from psychiatry, policy makers, and the public at large. 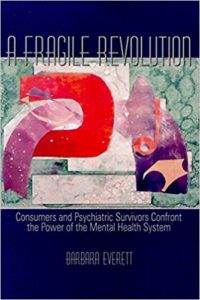 A Fragile Revolution, Consumers and Psychiatric Survivors Confront the Power of the Mental Health System Barbara Everett, ISBN13: 978-0-88920-342-6, WLU Press, 2000
Despite two centuries and three major reform movements, mental patients have remained on the outside of the mainstream of society, often living in poverty and violence. Today we are undergoing yet another period of reform and, in a historical first, ex-mental patients, now calling themselves consumers and psychiatric survivors, have been recruited in record numbers by the Ontario government to participate in the change process.
A Fragile Revolution investigates the complex relationship between ex-mental patients, the government, the mental health system, and mental health professionals. It also explores how the recent changes in policy have affected that relationship, creating new tensions and new opportunities.
Using qualitative interviews with prominent consumer and survivor activists, Everett examines how consumers and survivors define themselves, how they define mental illness, and how their personal experience has been translated into political action.
While it is clear that consumers and survivors have affected the rhetoric of reform, they know that words do not equal action. As they struggle to develop their own separate advocacy agenda, they acknowledge that theirs is a fragile revolution, but one that is here to stay. 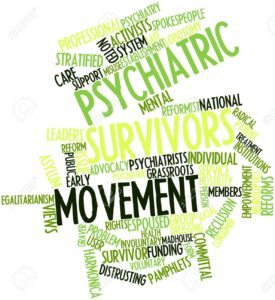 The Psychiatric survivors movement From Wikipedia, the free encyclopedi. Research into consumer/survivor initiatives (CSIs) suggests they can help with social support, empowerment, mental wellbeing, self-management and reduced service use, identity transformation and enhanced quality of life. However, studies have focused on the support and self-help aspects of CSIs, neglecting that many organizations locate the causes of members’ problems in political and social institutions and are involved in activities to address issues of social justice.

The politics of madness: The mental patients' liberation movement in the 1970s Alvelo, Patria Joanne, 2009, Sarah Lawrence College, United States
This thesis explores the emergence of the mental patients' liberation movement in the 1970s. Like other social movements of the late 1960s and early 1970s, this movement was founded on the principles of self-definition and self-determination. Its participants transformed the identity of mental patient from a source of shame into a platform for activism, joining forces to judge the mental health system that had judged them so harshly and to take action to correct the faults they found. Chapter One describes the abusive practices of psychiatry before the movement. Chapter Two reviews the critiques of such practices put forth by anti-psychiatry and feminism, both of which influenced the ex-patients' movement. Chapter Three explores the movement's prominent activities in the 1970s. My chief concern here is to highlight the importance of self-determination in the ex-patients' movement and to illustrate its value to its participants.

MindFreedom International is a nonprofit organization that unites 100 sponsor and affiliate grassroots groups with thousands of individual members to win human rights and alternatives for people labeled with psychiatric disabilities.

Mental health and survivors' movements and context A history organised by the Survivors History Group in association with the survivor history internet forum and network and the mental health history timeline The Survivors History Group was founded in April 2005 to value and celebrate the contribution that mental health service users/survivors have made and are making to history. It is working towards a comprehensive history on this site and in a book. It will also preserve historical material in digital form on this site, and in printed and other forms.