OUR HISTORY OF MENTAL HEALTH:

It is important that we learn from the history of mental health development in our local communities, areas and countries. This has mainly been about how we have provided support to people with mental health conditions in large institutions.

Where we are today in providing mental health services and practices, has been learnt from the way that we dealt with people in the past. Some of these experiences have been positive and should  inform our practice today. On the other hand there were some practices and conditions for people that should not be replicated as they are not helpful.

We are going to to gather and share historical information about these experiences through publishing stories, archives, pictures, books, pamphlets, posters, records, policies, etc.

This resource will be built from information provided by IMHCN members and supporters. We will also be adding resources that are available via the internet and through researching academic libraries.

The History of our Local Mental Health Institutions

Agnes's Jacket: A Psychologist's Search for the Meanings of Madness Gail A. Hornstein,PCCS Books; UK Edition edition ISBN-10: 1906254451, 2012
In a Victorian-era German asylum, seamstress Agnes Richter painstakingly stitched a mysterious autobiographical text into every inch of the jacket she created from her institutional uniform. Despite every attempt to silence them, hundreds of other patients have managed to get their stories out, at least in disguised form, and so it continues today. A vast gulf exists between the way medicine explains psychiatric illness and the experiences of those who suffer. Hornstein's brilliant work helps us to bridge that gulf, guiding us through the inner lives of those diagnosed with schizophrenia, bipolar illness, depression, and paranoia and emerging with nothing less than a new model for understanding so-called 'mental illness', one another and ourselves. One which asks not 'what's wrong with you' but 'what happened to you and how did you manage to survive?' 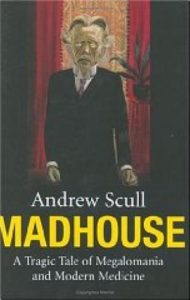 Madhouse: A Tragic Tale of Megalomania and Modern Medicine Andrew Scull, Yale University Press, 2007
Madhouse reveals a long-suppressed medical scandal, shocking in its brutality and sobering in its implications. It shows how a leading American psychiatrist of the early twentieth century came to believe that mental illnesses were the product of chronic infections that poisoned the brain. Convinced that he had uncovered the single source of psychosis, Henry Cotton, superintendent of the Trenton State Hospital, New Jersey, launched a ruthless campaign to ?eliminate the perils of pus infection.” Teeth were pulled, tonsils excised, and stomachs, spleens, colons, and uteruses were all sacrificed in the assault on ?focal sepsis.”
Many patients did not survive Cotton's surgeries; thousands more were left mangled and maimed. Cotton's work was controversial, yet none of his colleagues questioned his experimental practices. Subsequent historians and psychiatrists too have ignored the events that cast doubt on their favorite narratives of scientific and humanitarian progress.
In a remarkable feat of historical detective work, Andrew Scull exposes the full, frightening story of madness among the mad-doctors. Drawing on a wealth of documents and interviews, he reconstructs in vivid detail a nightmarish, cautionary chapter in modern psychiatry when professionals failed to police themselves. 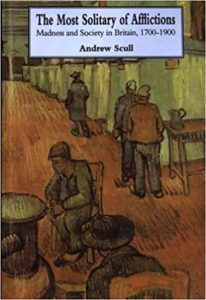 Most Solitary of Afflictions, Madness and Society in Britain, 1700-1900  Andrew T. Scull, Yale University Press, 2005
The routine confinement of the deranged in a network of specialized and purposely built asylums is essentially a 19th-century phenomenon. Likewise, it is only from the Victorian era that a newly self-conscious and organized profession of psychiatry emerged and sought to shut the mad away in therapeutic isolation. In this book, Andrew Scull studies the evolution of the treatment of lunacy in England and Wales, tracing what lies behind the transformations in social practices and beliefs, examining how institutional management of the mad came to replace traditional systems of family and local care, and exploring the striking contrast between the utopian expectations of the asylum's founders and the harsh realities of life in these asylums. 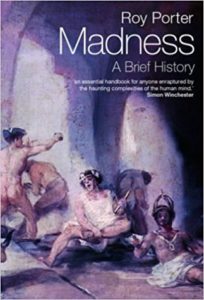 Madness: A Brief History Roy Porter, Paw Prints, 2008, ISBN 1439559333, 9781439559338
Looking back on his confinement to Bethlem, Restoration playwright Nathaniel Lee declared: "They called me mad, and I called them mad, and damn them, they outvoted me." As Roy Porter shows in Madness: A Brief History, thinking about who qualifies as insane, what causes mental illness, and how such illness should be treated has varied wildly throughout recorded history, sometimes veering dangerously close to the arbitrariness Lee describes and often encompassing cures considerably worse than the illness itself.
Drawing upon eyewitness accounts of doctors, writers, artists, and the mad themselves, Roy Porter tells the story of our changing notions of insanity and of the treatments for mental illness that have been employed from antiquity to the present day. Beginning with 5,000-year-old skulls with tiny holes bored in them (to allow demons to escape), through conceptions of madness as an acute phase in the trial of souls, as an imbalance of "the humors," as the "divine fury" of creative genius, or as the malfunctioning of brain chemistry, Porter shows the many ways madness has been perceived and misperceived in every historical period. He takes us on a fascinating round of treatments, ranging from exorcism and therapeutic terror--including immersion in a tub of eels--to the first asylums, shock therapy, the birth of psychoanalysis, and the current use of psychotropic drugs.
Throughout, Madness: A Brief History offers a balanced view, showing both the humane attempts to help the insane as well as the ridiculous and often cruel misunderstanding that have bedeviled our efforts to heal the mind of its myriad afflictions.

A Mad People's History of Madness Peterson, Dale, University of Pistburgh, 1982, ISBN 9780822953319
A man desperately tries to keep his pact with the Devil, a woman is imprisoned in an insane asylum by her husband because of religious differences, and, on the testimony of a mere stranger, “a London citizen” is sentenced to a private madhouse. This anthology of writings by mad and allegedly mad people is a comprehensive overview of the history of mental illness for the past five hundred years-from the viewpoint of the patients themselves. 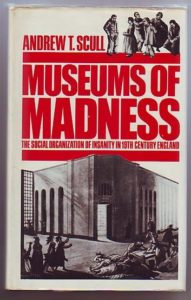 Museums of Madness: Social Organization of Insanity in 19th Century England Andrew T. Scull, Viking, 1979,  ISBN-10: 0713911077
An historical and sociological analysis of the institutionalization of the mentally unwell (started before this term even came into existence.) Scull examines he creation of institutions, their growth and finally assesses the apparent increase in 'insanity' prevalence. 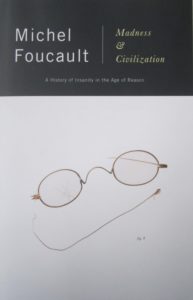 Madness and Civilization Michel Foucault, Routledge Classics, 2001, ISBN-10: 0415253853  In this classic account of madness, Michel Foucault shows once and for all why he is one of the most distinguished European philosophers since the end of World War II. Madness and civilization is a powerful survey on the historical development of what we call madness today. What the term means today is radically different from what it meant during the age of reason. This book takes a more or less chronological approach to the development of madness. What is most important is it shows how the term mad was manipulated throughout history in order for society to redefine itself against "the other." This book makes a good case as to why we still live under the shadow of Freud, as Foucault credits him with defining the relationship of the clinically insane, and the physician.

Mental Health Timeline A mental health history including asylum and community care periods, with links to Andrew Roberts' book on the Lunacy Commission and other mental health writings, and the asylums index and word history. Centred on England and Wales, it reaches out to the rest of the world with links to the general timeline of science and society, America timeline, crime timeline, and the (embryo) sunrise, earthcor, and local London timelines. Seeks to include views from mental illness and learning disability consumers, patients, users, clients along with views on madness and disability. Also bibliographies and biographies of commissioners.

Mental Health Archive This guide explains which records of mental health patients are held at The National Archives and which are held in local archives. The guide covers records of lunatic asylums and records relating to the administration of the estates of people deemed incapable of managing their own affairs.

The History of Mental Illness: From "Skull Drills" to "Happy Pills" Student Pulse is an online open-access academic journal focused on publishing the work of university students from around the world in a wide range of academic disciplines.

Mental health and illness from the Science Museum website.

History of mental disorders From Wikipedia, the free encyclopedia. From Egyptian and Mesopotamian; Ancient Hindu and Punjabi; Chinese; Ancient Greece and Rome; Hebrew and Israelite; Middle Ages to the modern age.

History of psychiatric institutions From Wikipedia, the free encyclopedia
The rise of the lunatic asylum and its gradual transformation into, and eventual replacement by, the modern psychiatric hospital, explains the rise of organized, institutional psychiatry. While there were earlier institutions that housed the 'insane,' the arrival at the answer of institutionalisation as the correct solution to the problem of madness was very much an event of the nineteenth century.
To illustrate this with one regional example, in England at the beginning of the nineteenth century there were, perhaps, a few thousand "lunatics" housed in a variety of disparate institutions but by 1900 that figure had grown to about 100,000. That this growth should coincide with the growth of alienism, now known as psychiatry, as a medical specialism is not coincidental.

A History of the Madhouse: BBC Documentary which tells the fascinating and poignant story of the closure of Britain's mental asylums. In the post-war period, 150,000 people were hidden away in 120 of these vast Victorian institutions all across the country. Today, most mental patients live out in the community and the asylums have all but disappeared. Through powerful testimonies from patients, nurses and doctors, the film explores this seismic revolution and what it tells us about society's changing attitudes to mental illness over the last sixty years.

Mental Health Museum, Stanley Royd Hospital, Yorkshire:  The Mental Health Museum is a unique museum in the heart of the Fieldhead site in Wakefield. It is run by South West Yorkshire Partnership NHS Foundation Trust. The museum houses a remarkable collection of mental health related objects that span the history of mental health care from the early 19th century through to the present day.