Open dialogue is way of working with people who are diagnosed with schizophrenia and other forms of psychosis (and who may hear voices). As a process it offers a different way of understanding the reasons for the experience and an effective and empowering way to find resolution. On this page we describe this approach and provide links to more resources on this important and innovative way of working. 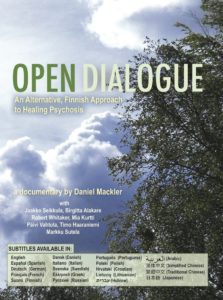 The Open Dialogue approach is an innovative approach to people experiencing a mental health crisis and their families/networks, and a system of care, developed by Jaakko Sekkula, Markku Sutela and their multidisciplinary team at Keropudas Hospital in Tornio, Western Lapland, Finland over the last 30 years.

In the 1980s psychiatric services in Western Lapland had one of the worst incidences of ‘schizophrenia’. Now they have the best documented outcomes in the Western World. For example, around 75% of those experiencing psychosis have returned to work or study within 2 years and only around 20% are still taking antipsychotic medication at 2 year follow-up.

Working with families and social networks, as much as possible in their own homes, Open Dialogue teams work to help all those involved in a crisis situation to be together and to engage in dialogue.

It has been their experience that if the family/team can bear the extreme emotion in a crisis situation, and tolerate the uncertainty, in time shared meaning usually emerges and healing is possible.

Open Dialogue has drawn on a number of theoretical models, including systemic family therapy, dialogical theory and social constructionism.

There is a strong convergence between Open Dialogue and recovery-oriented principles and practices. Both embrace recovery as a genuine process of revival and resiliency, which is grounded in hope, empowerment, and a supportive network. Open Dialogue creates democratic partnerships between professionals and the people they serve to restore productive and meaningful lives. Both the recovery perspective and Open Dialogue are reinforced by the knowledge that people with mental health and addiction problems can and do persevere and play meaningful roles in society.

Description of the Open Dialogue Approach

This way of working has garnered widespread attention for dramatically improving outcomes. Open Dialogue de-emphasizes pharmaceutical intervention and instead establishes a dialogue with the patient, provides immediate help, and organizes “a treatment meeting” within twenty-four hours of the initial contact.

Open Dialogue sees psychosis as “happening between people, not within a person.”, putting attention on helping improve the social relationships surrounding the person in crisis as the key to recovery.

The Open Dialogue addresses the problems in the network of relationships surrounding a person who is “in crisis,” rather than assuming the problem is inside the person’s head. Helping the social network – including changing attitudes of providers – rather than just focusing on achieving change in the person in crisis. The problem the process seeks to resolve is seen as being between people and in the broader social context, not in a pathology in the individual.

Open Dialogue has achieved dramatic treatment outcomes — avoiding hospitalization, lowering use of medicarion, and getting people through crisis.

clients are not compelled to include family members if they are against it, and safety and abuse issues are given priority. However, separation from an abusive family is not always considered the best strategy, because by removing oneself you may lose the opportunity to confront and challenge the abuse.

At a “first break” there is an opportunity to bring family dynamics out into the open and achieve power shifts in relationships. Someone who engages with an abusive family member directly, and successfully overcomes emotional dependency or fear, might then have stronger resources to transform deeper problems. When you separate from your family, you might carry unresolved feelings and patterns that shape the rest of your relationships and life, and find you haven’t really separated at all.

The aim of the treatment meeting is defined as that of dialogue, in which the patient can find voice, thus reducing the person’s sense of isolation.

The approach emphasizes the process of finding language for psychotic experience that previously was inexpressible and creating a shared understanding of the crisis within a network.

The use of ordinary words and creation of joint meanings tends to generate a collaborative set of relationships and to open up an avenue to people’s own knowledge, skills, and capabilities.

The results consistently show that this way of working reduces hospitalization, lowers use of medication, and leads to less recurrance of crisis when compared with psychosis treatment as usual. For example

A possible reason for these relatively good prognosis was the shortening of the duration of untreated psychosis (DUP) to 3.6 months in Western Lapland, where the network-centred system has emphasised immediate attention to acute disturbances before they become hardened into chronic conditions.